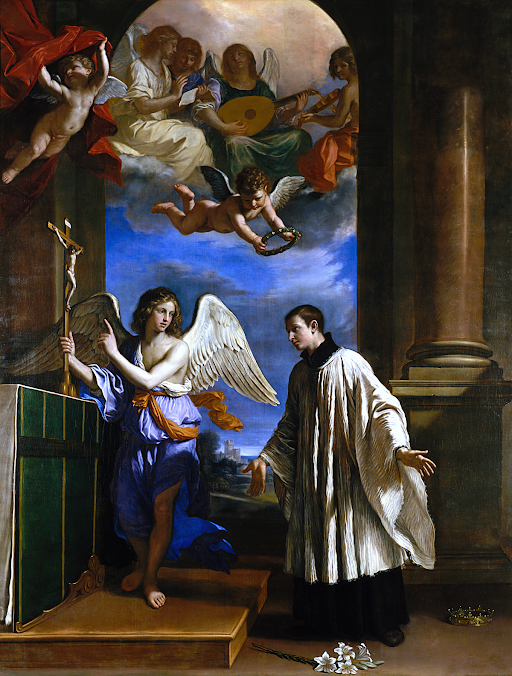 "The Vocation of Saint Aloysius Gonzaga"
Painted by Giovanni Francesco Barbieri in 1650.

Aloysius Gonzaga (Luigi Gonzaga, 1568-1591) gave up a privileged life and a princely inheritance to live the vows of religious life even to the point of contacting the plague because of his selfless care for people already sick with it. He was the eldest son of the Marquis of Castiglione, and heir to the family title. The Gonzagas were known as patrons of Renaissance artists, and they ruled what amounted to a kingdom.

As early as age seven, he became attracted to prayer and turned away from the courtly life around him. The young Gonzaga withdrew from this world and became firm in his desire to never offend God by sinning. He also began to pray the Psalms daily and later started meditating after he discovered a prayer book written by the Jesuit Peter Canisius. His piety included daily Mass, weekly communion and fasting three days a week.

Plague and famine struck Italy the following year and Gonzaga threw himself into caring for the victims of the plague. He begged alms for the sick and physically carried those he found in the streets to a hospital where he washed and fed them and prepared them for the sacraments. He told his spiritual director, Robert Bellarmine (who would later be recognized as a saint), that he had a premonition he would die soon.  Gonzaga contacted the plague when he cared for a man who had the plague. The young Jesuit put himself to bed on March 3, 1591.  He knew he was dying and asked to receive communion. Two Jesuits watched with him through the night and saw his face change as he held onto a cross and called the name of Jesus. He was only 23 when he died. His body is now kept in the church of St. Ignatius in Rome. - Originally Collected and edited by: Tom Rochford, SJ