The world has sold women a bill of goods. When it comes to abortion, birth control, or sex outside of marriage, women are told these actions or lifestyles are necessary for their true freedom. This so-called "freedom," however, has been narrowly defined by and limited to sexuality, and brings with it a host of physical, emotional and spiritual consequences.

In this elective, Teresa Tomeo takes a closer look at these "freedoms" and relates how medical science, sociological studies, and surveys performed by major secular institutions all show the truth of Catholic teaching concerning the fallout of the sexual revolution touted by radical feminists.

Compare for yourself what the culture says about the Church and women to what the Church really teaches about women. (It is after all, the Catholic Church who upholds the teaching that a woman, Mary the Mother of God, has been given the title "Queen of Heaven.") Among the Church documents referred to in this elective are:

All the documents are hidden gems of truth and support the equality and dignity of women - and all of them are written by the men who govern the Catholic Church!

Finally, Teresa Tomeo will help you understand the Scriptures in a new way in terms of Jesus' interactions with women. You'll be able to appreciate his desire for women to embrace their true dignity and identity as daughters of the King of Kings.

Get the real story about women and the Catholic Church - Teresa Tomeo presents the facts, fictions, and timeless truths about the love of Christ and his Church for all women.

Lecture 1: Women Are Made in God’s Image
Our culture today faces many controversial questions concerning who women are. Are men and women equal? Why are women oppressed? What must we do to empower women? There is, indeed, a war on women, but it does not derive from the Church or pro-life movement as many feminists today would suggest - but from the feminist movement itself. So, what does it mean for men and women to be made in the image and likeness of God? What does this tell us about the Church’s understanding of the dignity of the female person?

Lecture 2: God's Unconditional Love for Women
In this lecture, you will explore the cultural attacks on women in light of the story of the woman at the well. What is the root of modern woman’s desire to change herself? More potent now than ever, there is a need for women to rejoice in their feminine nature and care for themselves as Christ calls all people to do. Discover how the Church rejoices in women and recognizes their vital role in Christ’s ultimate plan.

Lecture 3: Church Documents for and About Women
Women have always been central to Christ and Christianity. Join your professor in studying the Church documents that will uncover the traditions and teachings on the nature of women and their role in Christianity. In light of this hope, it is necessary to acknowledge the lies, controversy, and healing that must happen for our culture.

Lecture 4: Mother Church Knows Best
In this final lecture, consider the controversies of the Church: why does the Faithful remain with Her throughout all the controversy and scandals? Finally, consider the ill effects that occur when our culture falls away from church teaching — specifically in light of women and the sexual revolution. 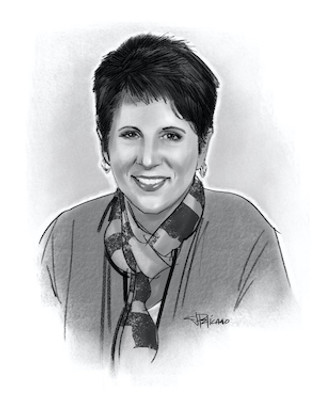 Teresa Tomeo is a bestselling author, syndicated Catholic talk show host, and speaker with more than thirty years of experience in print and broadcast media. Her weekday radio program, Catholic Connection is a co-production of Ave Maria Radio and EWTN. Tomeo is a columnist and special correspondent for OSV Newsweekly. She was named a Vatican conference speaker and conference delegate and spoke at the 2013 conference the “Rights of the Family and the Challenges of the Contemporary World” sponsored by the Pontifical Council for the Family. Tomeo participated in the Vatican Women’s Congress in 2008. She speaks throughout North America and also leads overseas retreats and pilgrimages annually.

She publishes many best selling books such as: Extreme Makeover: Women Transformed by Christ, Not conformed to the Culture; and Noise: How our Media Saturated Culture Dominates Lives and Dismantles Families. Teresa also hosts a monthly webinar, Catholic Leaders Webinar Series: Media Matters, produced by Our Sunday Visitor.

Reclaiming Feminism: The Church's Traditions and Teachings on the Dignity of Women

Meditations on Death: Preparing for Eternity

The Hidden Meaning of The Lord of the Rings: The Theological Vision in Tolkien's Fiction

A Tour of Saint Peter's Square and Basilica: Exploring the History and Beauty of the Heart of Rome

The New Testament Canon: The Development of the Gospels from Oral Tradition to Sacred Scripture

The Hobbit: Discovering Grace and Providence in Bilbo's Adventures